These dolls represent my best work to date. They took research. I had to make a connection to the essence of each being. I had to do them to the best of my ability.

See, I have this friend/soror/sister name Sili. She’s awesome. I’ve known her over 10 years. When I began to put my toe in the waters of entrepreneurship, she was my first customer when she purchased a key chain that I showed her while we were sitting next to each other at a meeting. Since then, she has been a regular supporter of my handmade business. Since this initial sale, I’d been making crocheted dolls for about a year or so, 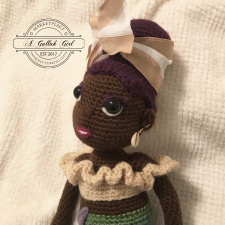 but at the end of 2018, I made a mermaid with a “story”. The story of a mermaid who lived off of the coast of Hilton Head Island (where my maternal family is from), and I named her Tinga, after my grandmother. At that moment, I knew that I wanted to make dolls that were more than just a toy, but representative of one’s journey. I listed “Tinga” in my Etsy Shop, and guess who snatched her up within minutes of the posting—The awesome Sili Recio, of SiliRecio.com. Very soon after receiving Tinga in the mail, Sili contacted me about creating two dolls to commemorate the journey she was on and once again, the opportunity presented itself for me to tell a story.

Sili is on a religious journey. She shares her story on her blog. Though I am a Christian, I acknowledge the fact that religion existed before Christianity. I felt the connection to her journey as she connects to the roots of her ancestors, because as a Gullah Descendant, I know there are religious beliefs and traditions that are still practiced in the Gullah Culture that is rooted in our African ancestry. The dolls represent the Orishas Oya and Oshun. 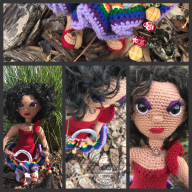 Oya was crafted intentionally to resemble Sili. When I asked Sili how she wanted to have her hair styled, the only instruction I was given is that “she has to have ‘Sili’ hair”—Alrighty then. The schythe and iruke, both also made by me, are inspired by the ones that belong to Sili. Oya is warrior, which I designed with flat feet. She is ground and “stays ready”. She is in customary skirt of 9 colors and has 9 copper bangles on her wrist.

When crafting Oshun, I had to tap into my inner goddess. Oshun is often seen with her peacock fan and compact. I wanted to create Oshun so that she could fan herself and check her angles in her mirror. I tapped into my “kuumba” and created and fixture within the doll that would make her upper body posable. This was a first for me and I was pleased with the outcome. I opted for a “pointed” toe for her because of her level of femininity and a goddess braid adorned with cowrie shells.

These dolls are a physical representation of the orishas, and I encourage you to take a moment to learn about what they represent. They stories of strength will inspire you.

Believer. Wife. Mother. Daughter. Friend. Soror. Creative. Foodie. Gullah. Me. Owner of and curator at A Gullah Girl Marketplace and the creative hands behind the Candy Doll's Legacy Collection. Join me on my adventures in Life, Love & Gumbo. View all posts by Chandra Waters

2 thoughts on “A Tale of Two Dolls”